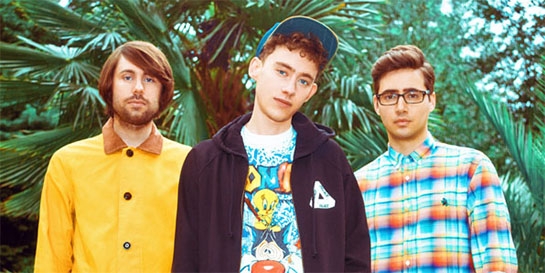 Olly Alexander, Emre Turkmen and Mikey Goldsworthy came together as Years & Years four years ago, after Mikey overheard his friend Olly’s shower singing efforts and invited him to join his band. After the best possible start to 2015 for Years & Years with the trio being named as the winners of BBC Music Sound Of 2015 poll, things are looking up for Polydor’s electronic pop group.

The accolade comes off the back of a successful 2014 for bassist Mikey, keyboard player Emre and vocalist Olly, with the trio playing support slots with Clean Bandit and Sound Of 2014 winner Sam Smith, as well as performing at a number of UK festivals including The Great Escape, Bestival and Latitude.

The bright lights of the stage appear to be all too familiar for frontman Olly Alexander, the falsetto vocalist and songwriter cutting his teeth as an actor appearing in Channel 4’s ‘Skins’. However Olly’s musical talent appears to have shone through as part of Y&Y, their “sunny electronic-soul, dominated by Alexander’s high, sweet voice and digital chimes” offering a “late burst of summer to your speakers” as reviewed by David Smyth of London’s Evening Standard.

The boys claim to have a melting pot of influences, saying “musically we all agree on Flying Lotus, Diplo, Jai Paul and 90′s R&B” displaying the eclectic variety that inspires the group as they write their own music. A nod to their love of 90’s R&B came with their stripped-down, haunting rendition of Blu Cantrell’s ‘Breathe’.

2013’s ‘Traps’ was released on Kitsune and picked up strong support for the trio, with Michael Cragg of The Guardian referencing it as an “elastic, almost punk-funk-esque stomper” and complimenting Olly’s “choirboy croon”.

Fast forward to now and the crowning of Y&Y as the sound of 2015, the band said: “We can't really get our heads round it, Olly nearly passed out when we found out, it was so surreal and emotional. It feels like it means we’ve got a real shot, which means the world to us. People are going to listen to what we’re going to do, and we’ve just got to not muck it up. We’ve got to make the most of it and deliver.”

With Olly’s vocals also featuring on Polydor release ‘Illuminate’ from Tourist, it seems heads are turning and the boys’ talent is being recognised and celebrated.

Polydor’s A&R director Ben Mortimer says, “We at Polydor had been aware of Years & Years for some time. But we got particularly interested when they put the video for Real up online. It felt like a perfect storm. A great song, killer vocals, and all backed with spot on production. And with a really interesting video to boot. Then and there we made it our absolute mission to sign them up. We certainly haven’t regretted that decision, as they keep going from strength to strength!”