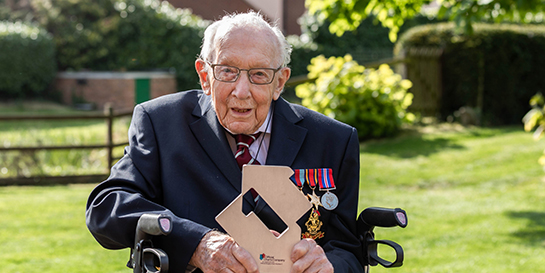 In one of the most heart-warming chart races in modern times, Decca’s Michael Ball and Captain Tom Moore have secured the top spot in the Official Charts with their charity single You’ll Never Walk Alone.

The track was first announced last Friday when Michael shared the news on his socials that he will be releasing a charity single with Captain Tom, who has raised an astonishing £28m to date for his 100th birthday walk in aid of the NHS.

The race took a twist last night when global star The Weeknd, who was predicted to secure the top spot, intervened and encouraged all of his fans on socials to support Captain Tom to help take his track to number one.

Decca’s campaign manager Jenni Champion says, “When our very own Michael Ball sang alongside Captain Tom Moore on BBC Breakfast, we knew there was an opportunity here to help Tom’s fund and, as always, the incredible Decca team pulled together from all angles to make it happen. From an idea to a release in under 24 hours it was quite a crazy journey but something that we are all so passionate about and worked collaboratively as a team to make possible. Captain Tom has been a massive inspiration to the world through such an uncertain time and being involved with this release feels incredibly special and is such an honour. Tom is 100 years old next week and we wanted nothing more than to get him a number one single for his birthday!”.

The team were quick to press go on a nationwide marketing push after the track was delivered to A&R at 3am Friday morning before being released at 10am. The video had an equally quick turnaround for delivery on Sunday evening after the team utilised Zoom as Michael and Captain Tom recorded from home while producer Nick contacted members of the NHS Voice of Care Choir to record special features.

There’s been no shortage of support for the track from institutions including Celtic FC and Liverpool FC and their respective players. The #WalkWithTom hashtag has been shared thousands of times and the Twitter conversations between Michael’s and Captain Tom’s accounts have helped drive interest in the track. The marketing push also included a range of online digital tools including Facebook frames, social media banners, downloadable posters to print as well as engaging influencers and mumfluencers to help spread the message.

All proceeds from the single are being donated to Captain Tom Moore’s 100th birthday walk in aid of NHS Charities Together which supports the incredible NHS staff and volunteers caring for COVID-19 patients. You can buy the track here: https://michaelball.lnk.to/NeverWalkAloneTW