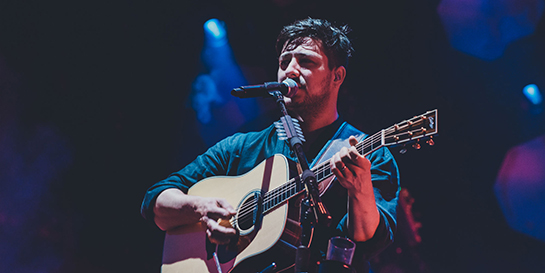 The team at Island have been busy behind the scenes supporting Marcus Mumford’s early release of his stripped down cover of Rodgers and Hammerstein’s You’ll Never Walk Alone in response to the coronavirus crisis.

All proceeds from the track, which was released last Friday, will go to The Grenfell Foundation and War Child UK - two organisations supporting vulnerable communities in the midst of the pandemic.

The Mumford & Sons frontman first played the track on Instagram Live last Thursday while in self-isolation. The following day at 7.45am the song was played simultaneously on BBC Radio 1’s weekend breakfast show with Matt Edmondson and Molly King, Zoe Ball’s Radio 2 show and Lauren Laverne’s BBC 6 Music in a show of solidarity across the stations.

The team at Island have been focusing on securing the support of all streaming partners with the track already moving up the UK iTunes charts with additional DSP support to filter through over the coming days. There is also high profile backing on the way from the likes of Adele, Sam Smith, Liverpool FC and Greg James who are all poised to support the track on social media.

Sam Lunn, Island’s head of campaign strategy says, “You’ll Never Walk Alone came along under serendipitous circumstances, having been a song that Marcus recorded in February whilst writing the score for a forthcoming TV show. As a song appropriate for solidarity in these troubled times, we all felt like now was the right time to release it and support the two causes, War Child UK and The Grenfell Foundation, to whom all the proceeds are going”.

The track is originally a show tune from the 1945 Rodgers and Hammerstein musical Carousel and is sung by football clubs across the world. It has become a permanent fixture at Liverpool FC games following the chart success of the 1963 version by the local Merseybeat stars Gerry And The Pacemakers.