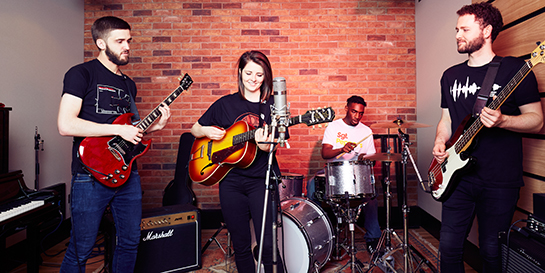 Abbey Road has teamed up with Metro to launch Battle Of The Bands, an online competition for unsigned artists. The winner will be invited to record a single in one of Abbey Road’s new studios, The Gatehouse or The Front Room, which will be turned into a one-off vinyl as well as being mixed and mastered ready for Spotify, Tidal and Apple Music.

The finalists’ tracks will be posted on Abbey Road’s website homepage, where a public vote will decide who heads to the recording studio. The winner will be announced on July 12.

Abbey Road’s head of brand and marketing Mark Robertson says, “We’ve made the magic of Abbey Road accessible to emerging artists and producers in the form of our new studios and online mixing and mastering services. Nile Rodgers recorded in our new studios last month, working with Anderson Paak, Anais Aida and Bruno Mars, and with his passion for discovering and mentoring new artists, he seemed like the perfect fit for our judging panel.”

The competition was launched nationwide in Metro newspapers this week and within hours, 40 entries had been submitted.

To enter, send an original track as a WAV/AIFF audio file to bands@abbeyroad.com. The deadline for submission is June 19 at 12pm.