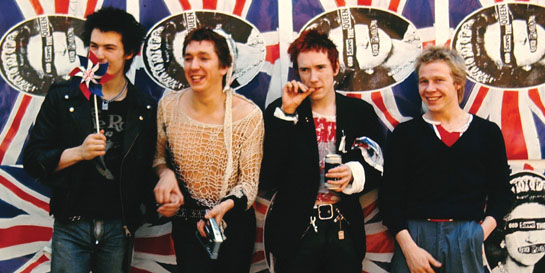 The Ramones might have come first.  And The Clash got to record more albums.  But, it was the Sex Pistols who transcended music to become the number one media villains, create an enduring icon in Sid Vicious and establish a blueprint for punk that still reverberates through the cultural landscape today.

Their most coherent manifesto - indeed the only studio album the Pistols recorded before they broke up - is the dozen tracks contained on Never Mind The Bollocks.

In typical Pistols style this debut created its own shock and awe when originally released by Virgin Records in October 1977.  Banned on release by several major retailers and quickly becoming the subject of an (unsuccessful) prosecution under the obscure Indecent Advertisements Act, everything about the album - its incendiary title, the genre-inventing music and the radical sleeve artwork - established the founding principles of punk.

35 years later Universal Music has revisited Never Mind... to assemble the definitive super deluxe box set release, unearthing on its way a treasure trove of visual and audio gems many of which haven’t seen the light of day before.

Universal Music UK head of catalogue product Johnny Chandler began the project in January following the move of the Pistols catalogue from Virgin/EMI.  The package couldn’t have found a better curator than with this one-time teen punk, hooked on the Pistols and The Jam.  “35 years on it is incredible to think that it is such a iconic record.  My older brother and myself were too scared to get a copy in the house for fear that my father would go mad at us,” says Chandler.  “The album still resonates, it is still causing ripples and still influencing people.”

That view finds favour with Bernie Rhodes, the former manager of The Clash and onetime associate of Sex Pistols manager Malcolm McLaren.  Speaking last night on a panel discussing punk, the Pistols and their music, Rhodes suggests punk is even more relevant today.  “Punk was about what needed to be done,” he says.  “Get this record and keep it for your grandchildren.  Punk happened because it had to happen; if it didn’t everyone would have died of boredom.”

With so much “dicing and slicing” of the Pistols catalogue over the past three decades, Chandler’s labour of love needed to be definitive and the last word on an album that critics regularly cite as one of the greatest and most influential records ever recorded.

Thus, Chandler and his team enlisted the help of the band and several of their closest confidantes, including film maker Julien Temple, who directed The Great Rock ‘n’ Roll Swindle, to find original master tapes, previously unreleased tracks and unseen footage of the band.

“Input from the band was something we looked for from day one,” explains Chandler.  “The task for us was to deliver something that the band is happy with and the fans are happy with.  All the contents have been approved by John Lydon and Steve Jones and everyone has had their opportunity to input.”

What they found hidden in the vaults of (Virgin parent) EMI, in the Pistols own archive and in the attics of the band’s associates was way beyond expectations.  “Usually the case is you see what is available to you and then you cut your cloth accordingly.  But, for this one we were really lucky,” adds Chandler.  “There was stuff dotted around all over, stuff in EMI’s deep storage facility that people had forgotten about or didn’t know was there. We look at tapes and quite often what is on them has not been fully documented so when you put the tape in a machine you can find another six other tracks on it.”

What’s In The Box:

CD2 - 1977 studio rarities and B-sides, including a version of the controversial song Belsen Was A Gas with vocals by Johnny Rotten. A key find was the long lost original master tapes of the album complete with the mastering notes by the album’s producer Chris Thomas and (studio manager and engineer) Bill Price.  Thomas presided over the remastering of this and according to Chandler the album sounds “clearer and brighter than ever.”  This comprises the first of three CDs in the deluxe box set.

Universal Music also uncovered myriad versions of demos and studio rarities, including those recorded by producer Dave Goodman in 1976 and early 1977 that were released on the semi-official bootleg Spunk.

“When we found all the tapes we weren’t sure what they were.  Basically we took them into studio and laid them up against Spunk and it was clear they were the same tracks, but in order to turn them into Spunk they had put loads of effects across the tracks and speeded up some of them.  So for the first time ever you can hear them as they were, as works in progress.”

But, undoubtedly the big find was a version of Belsen Was A Gas complete with Johnny Rotten vocal.  The Sid Vicious-penned song had previously only been thought to exist as a live version from late 1977 recordings of Pistols gigs or from the post-Rotten band with former Great Train Robber Ronnie Biggs on vocals.  “People weren’t sure if they had recorded it with John Lydon.  It was known as Sid’s song and they worked on it at (the band’s rehearsal rooms) in Denmark street,” says Chandler.

Unknown to subsequent Pistols biographers, former soundman and road manager John Tiberi had set the band up with Vicious on bass and recorded Belsen Was A Gas sometime in 1977.  Tiberi had hung on to the tape with several versions of the song - until now.

Several Chris Thomas demos, recorded at north London’s Wessex Studios where Never Mind...was recorded, and four single b-sides have also been added to the mix, making 21 demos and studio rarities on the second disc of the new set.

Disc 3 comprises two key live recordings of the band at the band’s  whirlwind peak in 1977, including a gig in Trondheim,  Norway.

The final disc is a DVD produced by Temple and features promo videos and footage shot by him and others of various Pistols gigs, including a performance in Penzance.

Also featured on the DVD is the band’s infamous Thames riverboat trip, where the Pistols played a set on deck in front of fans and the then Virgin boss Richard Branson.  The boat was later raided by police and several in the Pistols entourage, including McLaren, were assaulted and arrested.  “Seeing that live footage was fantastic. I think you get a real sense of the time,” adds Chandler.

The other major component of the package is a 100-page hardback book, which documents the band’s progress through year zero.  Chandler explains the book developed as a document to map the band’s progress through 1977 using a diary style.   Again, it features many previously unseen photographs of the Sex Pistols, including shots by Barry Plummer.  Former Mojo editor Pat Gilbert helped assemble many of the diary dates and quotes used.

“Doing it from the band’s perspective, but with a recording and touring bent it feels like a whole piece,” says Chandler.  “An awful lot has been written about the band, some of it true and an awful lot of it not.  We wanted this whole package to be as truer reflection as possible.”

The attention to detail extends to the colours used for the book.  The original album sleeve designer Jamie Reid had used different shades of yellow and pink on the front and back of the vinyl album.  Chandler’s team spend four months scouring Europe to match those colours.

Other additions in the new set include a 7 inch vinyl reproduction of God Save The Queen on the A&M record label.  A&M, like EMI before them, had signed the Pistols only to drop them a week later because it couldn’t stomach their abuse and violent outrages.  The label famously withdrew more than 20,000 copies of the single, pulping most of them and ensuring the remaining copies became a collectors item.  The single was later released by Virgin.

There is also a copy of John Lydon’s handwritten lyrics for God Save The Queen on the stationary of McLaren’s company, a large promo poster and a number of promo stickers.  “The boxed set is aimed pretty much at anyone who wants to know more about the Pistols and in particular 1977.  It is kind of document of that year in the band’s career.  The appeal is there for someone who remembers the band the first time around and for anyone who has come to it later it,” says Chandler.

Perhaps, as Temple hopes, the new release could inspire a new punk uprising.  The film maker, who did so much to capture the spirit of punk and the Pistols, says “Everything now is so cliched.  What we want is to get back that energy, but it has got to be something that no one has seen before.”

The box set is released on September 24.