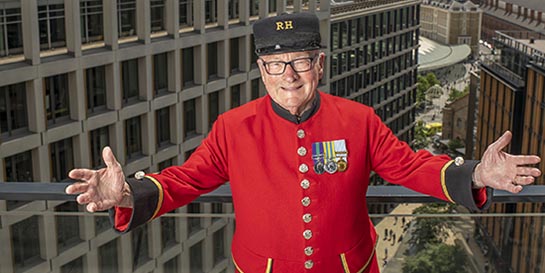 After capturing the hearts of the nation, Britain’s Got Talent winner Colin Thackery headed to the roof of 4PS yesterday to sign a record deal with Decca in partnership with Syco.

Decca Records president Rebecca Allen says, “It feels so incredibly fitting that Colin should sign to Decca, in its 90th anniversary year. The fact that Decca’s success started the year Colin was born, feels quite magical. He’s a unique artist and we are extremely proud to welcome him into our family.”

Having served Queen and country for 25 years, Colin is set to release his debut album on August 30 to coincide with the 80th anniversary of the outbreak of World War Two on September 3.

Colin revealed he entered Britain’s Got Talent following a dare as he was coming off the stage from singing at his local club. He went on to dedicate the three songs he performed en route to victory — Wind Beneath My Wings, We’ll Meet Again and Love Changes Everything — to his late wife Joan, who died of cancer in 2016 after 66 years of marriage.

The BGT final was watched by more than 10m TV viewers, who all saw Colin be crowned the winner in a moving finale. Following in the footsteps of previous winners, he will soon be gearing up for a performance in front of the Royal Family at the prestigious Royal Variety Performance in November.