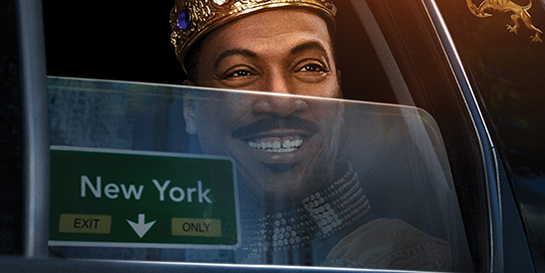 Alongside the global launch of the long-awaited sequel to the 1988 comedy classic Coming To America, the team at 0207 Def Jam have today released two albums: the film’s soundtrack and Rhythms of Zamunda, a collection of original songs from African artists inspired by the film.

The soundtrack opens with a tribute to the legendary Prince with a cover of Gett Off, featuring a trip of cast members, acclaimed multi-platinum award-winning G.O.O.D. Music/Def Jam R&B superstar Teyana Taylor and Jermaine Fowler (Superior Doughnuts), along with Brandon Rogers. There are also surprise performances in the film from Gladys Knight (Midnight Train To Zamunda), and a team up of En Vogue and Salt-N-Pepa (Whatta King/We Are Family Mashup) featuring Murphy as ‘Randy Watson’ with his band Sexual Chocolate.

Meanwhile, Rhythms of Zamunda: Music Inspired by Coming 2 America, which is being released in conjunction with Def Jam Africa, includes the single Black & White by South Africa’s most-streamed artist Nasty C and Ari Lennox which is currently playlisted on BBC 1Xtra. The Pan-African project bridges the distance between countries and cultures, tracing a musical roadmap through Western, Eastern, and South African soundscapes and introduces this synergy to listeners worldwide. The record boasts contributions from Nigerian superstar Tiwa Savage and Tekno, the late DJ Arafat from Côte d'Ivoire. Prince Kaybee and Msaki of South Africa, and Fally Ipupa from the Democratic Republic of Congo also feature among many other performers.

Akosua Scantlebury, marketing and projects manager at 0207 Def Jam said, “The original Coming To America is such an iconic cult film that to have the opportunity to work on not one but two soundtracks for the sequel Coming 2 America is extremely exciting. It resonates with so many people and despite being released in the 80s is still spoken about, watched and celebrated to this day. The soundtracks to the sequel take listeners on a journey through sound exploring the adventures of the film (Coming 2 America Motion Picture Soundtrack) and the land of Zamunda (Rhythms of Zamunda). Having both soundtracks and the film all releasing on the same day ensures that no matter where you go, you won’t be able to escape getting drawn into the energy and vibrancy of Coming 2 America.”