Dave and Stormzy team up on Clash 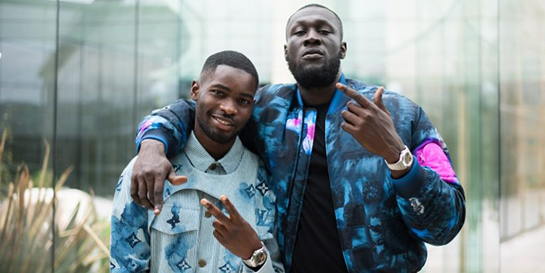 Dave and 0207 Def Jam’s signing Stormzy have teamed up on Clash, a highly anticipated collaboration between two of the UK’s biggest music stars.

Dave teased the track via socials last Friday, setting social media alight with a picture of the pair captioned simply “July 9th”. The collaboration further cements their musical friendship - Stormzy has supported Dave from his early days, including handing his Glastonbury headline slot over to Dave and Fredo to perform their hit Funky Friday.

Clash marks Dave’s first single since he dropped two surprise tracks Titanium and Mercury in April. On Monday, he also confirmed that his second studio album We’re All Alone In This Together will be released on July 23, following his Mercury Prize-winning debut Psychodrama. He also graced the cover of GQ earlier this week, where in a wide-ranging interview he reveals further details about the album and his songwriting process.

On Wednesday night, Stormzy and Dave made a surprise appearance on our screens ahead of England’s 2-1 victory over Denmark. Teaming up with Ian Wright, they featured in a pre-match video which saw them reminisce about previous England losses while reinforcing their belief and optimism in Gareth Southgate’s men.