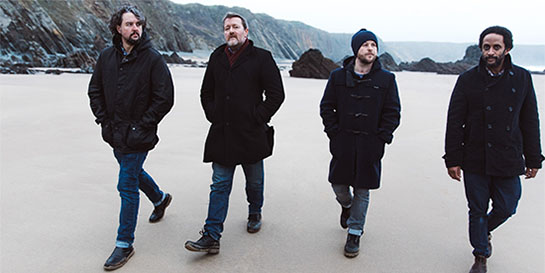 With a glittering three-decade career already under their belts, Elbow are back with an extensive marketing and promo campaign for today’s release of their eighth album, Giants Of All Sizes, via Polydor.

To celebrate the release and to mark tomorrow’s National Album Day, the band have also announced a limited edition of their album containing all of the tracks as a single continuous piece of music. The edition will be available tomorrow only in stores and online.

Polydor’s marketing team have focused on setting the tone of Giants Of All Sizes, which follows the 2017 number one Little Fictions, with a range of creative billboards across London.

Polydor’s senior marketing manager Ali Tant says, “Working on the new Elbow record personally has been a real career highlight. I’ve been a huge fan of the band since I first heard Any Day Now back in 2001. I’ve seen the band live on numerous occasions and over the years have been an excitable kid each time I’ve had the chance to meet them.

“For me this album campaign was relatively simple in the sense that this record is unlike any of the last three Elbow records. It’s a darker record that could only be made in 2019. For me it was important to let Guy’s lyrics set the tone for the album upfront of any music being heard. The opening line on the opening track, Dexter & Sinister, for me summed up the album’s tone, ‘and I don’t know Jesus anymore, and an endless sleep is awaiting me’. Launching the campaign with the lyrics to that song on a billboard, allowing fans to paint a picture in their minds ahead of hearing it, was important in resetting the dial from previous campaign launches.”

The TV team have also been busy curating an action-packed promo schedule for the band. First up was a performance on The Graham Norton Show last Friday ahead of this weekend’s appearance on Sunday Brunch. At the end of the month the band will be performing on Later With Jools Holland. Alongside the band’s busy TV schedule, the radio team have been scheduling a series of promo stop-offs with the likes of Chris Moyles, Chris Evans and Dermot O’Leary.

Elbow will be keeping it intimate with their upcoming tour in the spring with a series of residencies at relatively small venues across the country.