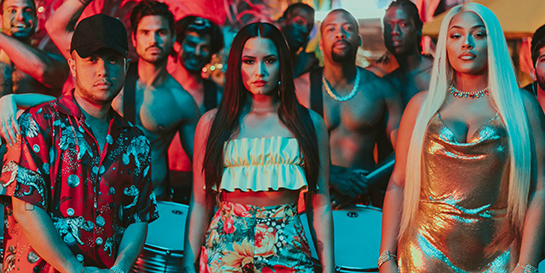 Jax Jones is riding high following the worldwide success of his smash single You Don't Know Me. He looks set to continue his winning streak, joining up with pop superstar Demi Lovato and the UK's fiercest MC Stefflon Don for his latest single Instruction. Released via Polydor, the track is growing from strength to strength, which has propelled since the arrival of the vibrant music video.

The accompanying Carnival-themed video perfectly visualises the song's summer vibes, with Jax’s two collaborators adding extra swag and confidence to the video. In a week, it has racked up nearly ten million views on YouTube, and has peaked in the top 10 on the iTunes chart.

The continuous pick-up of Instruction has seen the video labelled as Box’s Fast Track video of the week and MTV's Most Wanted.

The track is doing equally well on the airwaves, climbing National Airplay chart, has been added to playlists at Kiss, Capital and across Bauer stations, as well as an A-List add at BBC Radio 1.

Jax's music is rooted in the hip hop, grime and house music he was surrounded by in his teenage years. These influences come through both in the studio and in his wild live sets - most recently in his sold out 'House Work' UK tour - where he helms all the instruments himself, layering them upon beats and bass for a fresh, modern take on an old-school sound.

You Don't Know Me has had over 275 million combined global streams and gone multi-platinum around the world, and with over 6.3m total Shazams, it flew to the number one spot on Shazam globally, making it Jax's biggest hit to date.

Jax Jones is in the midst of a busy summer, with appearances at Tomorrowland, Reading & Leeds, and Boardmasters to name just a few.