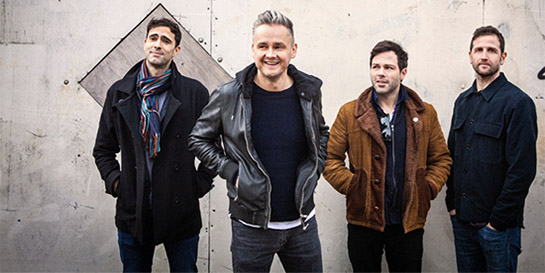 Island’s all-action promo campaign looks set to have secured Keane a top two spot in this week’s chart following the release of Cause And Effect, their first album since 2013.

The album has earned a string of positive reviews with a 5* rating from Attitude as well as 4* reviews from the Daily Mail, The Times, The Telegraph, Event Magazine and Daily Star.

The promo team have been covering all angles with the campaign kicking off with a series of TV appearances which included a performance on The One Show. The band followed up with an interview with BBC South East before heading to BBC Breakfast. Their TV appearances continue into next month with an acoustic performance on Sunday Brunch slated for October 13 before heading to Good Morning Britain.

Island marketing manager Charlie Smith says, “We’re honoured to still be releasing Keane music. Since their debut, Hopes And Fears, 15 years have passed, 13m albums have sold worldwide, and they’ve become one of the bona fide classics of the Island Records repertoire. Their new album is a faultless return to form. It’s already provided two of Radio 2’s most played weekly tracks of the year and seen the band sell out a national tour – including two nights at the Royal Albert Hall. We congratulate Tim, Tom, Richard and Jesse on another brilliant record and look forward to seeing it flourish in the months to come.”

The album has been flying around the world and has secured the top spot on the iTunes Chart in no less than 17 countries including Belgium, Brazil, Mexico, Netherlands, Singapore, Argentina, Ecuador, Chile, and Peru.

Having spent much of the summer blowing away festival crowds across Europe and wowing the USA with some intimate shows, Keane have embarked on a major sold out UK and Ireland tour which kicked off on Tuesday in Birmingham.