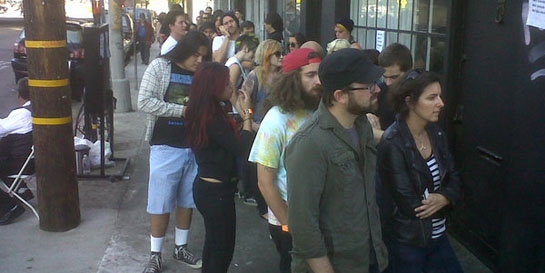 After a decade of intense lobbying, the Live Music Act became law this week. The new Act removes at a stroke a raft of red tape and bureaucracy imposed by the Licensing Act 2003, which bundled entertainment with the licensing of alcohol and unwittingly had the effect of shutting down hundreds of live music venues.

The Live Music Act allows promoters to put on amplified gigs - between 8am and 11pm - by new and established rock and pop acts without applying for costly and bureaucratic licences from local authorities - as long as the capacity of the gig is restricted to 200 people or less.

It also crucially allows any kind of venue, from bars to church halls, to host gigs by unamplified bands and acts, with no restriction on the number of punters.

The new Live Music Act also does away with the existing and sometimes onerous conditions - ranging from the type and genre of music played at venues to the number of musicians allowed on stage - that have been attached to the entertainment licences of venues under the previous regime.

The move has been celebrated by swathes of the music industry, from musicians trying to get a toe hold on the ladder to young promoters and A&R men searching out new talent.  Elbow’s Guy Garvey has been a key supporter of the Act and credits the early encouragement of the landlord of the local pub where his band played as a spur for the Fiction/Polydor group to continue honing their craft.  Garvey described the new legislation as “a very important step towards easing the path for musicians of tomorrow."

It is anticipated the new Live Music Act can create the environment to breed new acts; even new genres and movements like pub rock and punk, spawned in the early to late seventies when pubs in Britain had live music blasting out their doors most nights of the week.

The Rolling Stones, The Who, The Sex Pistols, U2 and nearly every critically acclaimed band from the last half century owe their success to performing in sweaty little bars and clubs throughout the country in front of a handful of fans.

Could the new Live Music Act create the seedbed for a similar explosion of talent in the next decade or so?  Why not.  And while many larger scale music events struggle because of a saturated festival market in the UK, there is no better time for grass roots music to be given this valuable shot in the arm.

The experience of cities such as Los Angeles, where live music is currently thriving in the hipster havens of Silverlake and Echo Park, demonstrates the importance of a strong bedrock of small venues to create a scene around upcoming bands and the promoters and labels who support them.

Any night of the week a young five-piece rockabilly band might set up in a vacant parking lot adjacent to a downtown LA bar without the punitive licensing regulations once common in the UK.

Local scenes are obviously rooted in places such as Camden Town and Shoreditch, but the Live Music Act promises an uplift in the number and variety of venues in London and throughout the UK’s other towns and cities, which can only help musicians ply their trade and build an audience.
UK Music, which with help from the Musicians Union and others helped push through the Live Music Act, believes the new legislation has the potential to create thousands of musicians, who can add to the (pounds) 1.5 billion currently earned by the live sector.

The key now is to ensure there is an accurate way to measure the economic and creative impact of the new Act:  in 2007 the Live Music Forum published its own assessment of the impact of the Licensing Act and concluded there had been harm done to small venues; many musicians complained that the old regime's dismantling of the so-called 2-in-a-bar exemption had meant they had trouble finding gigs. This led to heated debates with the Government's Department for Culture Media and Sport, which conducted its own surveys on the state of live music.

Musician and stalwart Live Music Bill campaigner Hamish Birchall argues studies done by the DCMS to disprove the LMF’s conclusions had been “methodically flawed” and predicts the UK's musical landscape will change radically from October 1 with the introduction of the Live Music Act.  However, he concedes it is not yet certain how quickly the benefits will be seen.

A brand new piece of research commissioned by UK Music helps provide some of these answers.  The organisation’s chief executive Jo Dipple says the major study investigates how some of the UK’s thousands of small scale live music outposts - and potential venues, such as restaurants and wine bars, which didn’t have an entertainment licence - will be affected by the new laws.

The research has captured the baseline data of what the current UK small scale live music scene looks like.  This will be critical for measuring its growth over the next year or so.  But, more importantly this initial research has also indicated that an additional 13,000 pubs and clubs could now host rock and pop bands for the first time because of the new Act and more than 20,000 venues, who already promote gigs, could be encouraged to increase their involvement in promoting live music.

The creative and artistic benefits of the new Act will probably take longer to work through the system in terms of label signings and new musical scenes.  But, no one who loves music - and live music in particular - can argue the Live Music Bill has been anything but good for the grass roots scene.