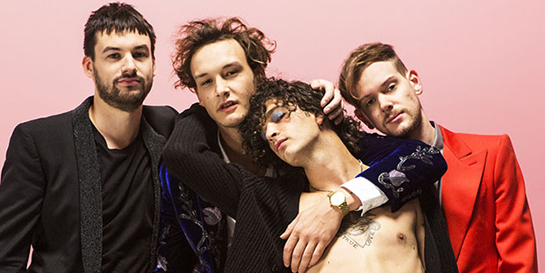 It was a huge evening for Universal Music acts at the 2016 Q Awards, with nine of our artists collecting ten of the fourteen awards on offer. Biggest surprise of the evening came for Polydor and Dirty Hit’s The 1975, who collected the Best Album award, beating David Bowie.

The Manchester four-piece landed the trophy for their second album I Like It When You Sleep, For You Are So Beautiful Yet So Unaware Of It. The band, who missed out on the three other awards for which they were nominated, were unable to attend the ceremonyy due to being on tour, and instead sent a video of frontman Matty, crowdsurfing at a gig last night, thanking the magazine and its readers.

Island’s U2 were the only group to collect two awards, landing best live act and the Gibson Les Paul Award, presented to The Edge.

Bastille took a break from their first arena tour to collect Best Track for Good Grief, the title track from their recent second album.

UMC’s Madness arrived at the show in style, stopping the Camden traffic and pulling up to the Roundhouse in a horse-drawn carriage. Suggs and his band of merry men collected the Hall Of Fame award.

This year's Q Awards marked the first time members of the public were able to attend the event since it started in 1990.