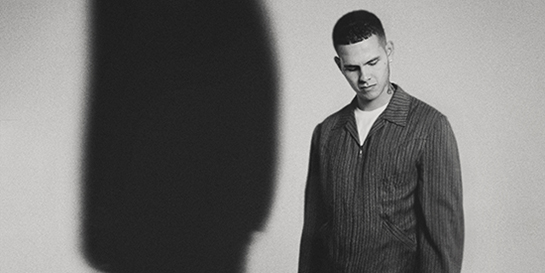 Tyron “slowthai” Frampton has today released his complex sophomore record TYRON via Method Records. An album of two halves, the first side displays the loud and outspoken slowthai we all know and love, while the second half takes on a more introspective and reflective tone, bringing into the open his internal struggle between light and dark.

The album feature list includes who’s who of rap royalty including Skepta, Denzel Curry and A$AP Rocky, with James Blake also on board for the poignant track Feel Away with Mount Kimbie. TYRON is available on CD and black vinyl, with the first run of the vinyl including an apple shaped and scented sticker in line with the album creative.

In the run up to album release, slowthai has featured in the likes of High Snobiety, Rolling Stone, Sunday Times Culture and GQ. The record is receiving brilliant reviews, with NME calling it “deeply moving”, the Evening Standard “a many sided gem” and The Times declaring in their 4* appraisal: “Slowthai is the British equivalent of Eminem: a preternaturally talented rapper who acts tough but is too much of an open book to cover his flaws and insecurities”.

At the beginning of the year, slowthai dropped third single MAZZA ft A$AP Rocky, which hit his highest week one streams to date on Spotify, and has now gathered over 6m streams. In MAZZA’s first week, the team saw a significant 132% streaming uplift on slowthai’s catalogue across all album tracks. Within five days, the music video for MAZZA surpassed 1.4m views and is now over 2.8m, clocking up over 137K Likes.

Today, slowthai takes to the cover of 38 New Music Friday playlists worldwide including Pollen, Who We Be, Anti Pop, and many more. The team have also secured a release homepage placement in the UK.

Warren Querns, head of 3rd party sales and label partners at UMUK says, “Working on this album has been like watching pieces of a jigsaw fall into place. The creativity and meticulous thought process behind every video, picture and post has been incredible. The album takes you to some very dark places but ultimately the message is hope and that’s got to be a good thing right now!”