Sundown festival has its biggest year so far 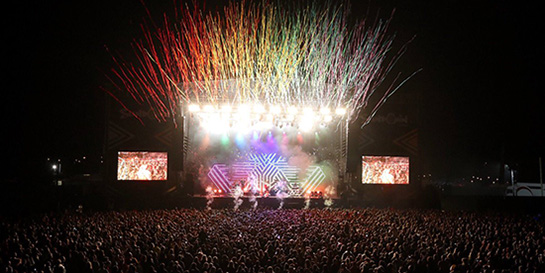 Over the weekend, more than 40,000 people travelled to Norfolk Showground in Norwich to see the likes of Chase & Status and Krept & Konan grace the main stage at this year’s Sundown Festival. This year has been the biggest year so far for the festival, which showcased a variety of UK talent over the three days.

Opening up the main stage this year was aspiring Cambridge rapper Big Heath. Saturday also saw new comers M.O and Kiko Bun perform to both dedicated and new fans. It wasn’t all new talent however as music veteran Dizzee Rascal performed to lively crowds before main headliners and dance legends Chase & Status took to the stage.

On Sunday, newcomer Imani Williams graced the stage where she performed her hits and treated the audience to a number of covers. Grime sensations Krept & Konan took over before Years & Years performed a colourful and mesmerising set. Sundown ended on a high with an unmissable campers-only Closing Party.

U-Live co-produces Sundown Festival. Managing director Sally Davies says, “Our aim for Sundown 2016 was to deliver a bigger and better festival and we achieved that through the introduction of a third stage, additional benefits for campers and the strongest line up in the history of the festival.

"The abundance of rain didn’t dampen our spirits over the weekend; in true UK festival style, the crowd embraced it and danced in wellies and ponchos. As I looked out at the crowd from the main stage each night, witnessing Norfolk Showground enjoy the pyro finale, I was so proud that we had delivered such a fantastic festival in Norwich. Sundown Festival is a great addition to our event portfolio and I’m looking forward to realising Sundown 2017 which the team have started working on already."

This year, Sundown also teamed up with dance music specialists Defected In The House, UKF, Ministry of Sound and Drum & Bass Arena, who provided tunes for festival goers across the weekend at The Castle Stage and The Nest Stage. Sally Davis adds, “Our stage partners added to the popularity of the dance tents, plus the hard work by all of the unsung heroes backstage deserves a special thank you.”