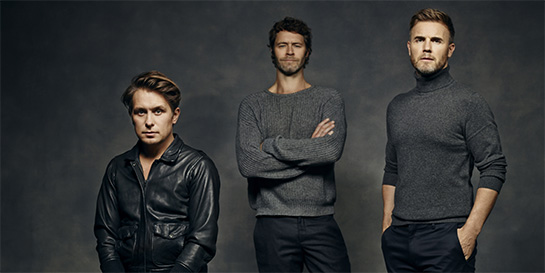 Take That are celebrating their 30th anniversary with the help of Polydor, marking the milestone with a re-imagined greatest hits album, Odyssey, as well as a huge UK tour.

The new album will be released on November 23,  but to coincide with the announcement today, fans were treated to a re-worked version of the band’s 1993 UK number one Pray.

Odyssey is a celebration of both Take That’s past and present.  Produced by Stuart Price, the album features tracks that span all three decades of the band’s history, a time in which they have achieved six number one albums and sold over 45m records, from their debut Take That And Party right up to the present day. The brilliantly reimagined versions of Take That classics gives fans the opportunity to hear the songs as they’ve never been heard before.

In addition to these reinterpretations, the 27-track album features three new tracks and some exciting collaborations.

Since their official anniversary is in 2019, Take That will kick off their tour across the UK and Europe in April next year, where they’ll be joined by special guest Rick Astley. Tickets go on sale next Friday.