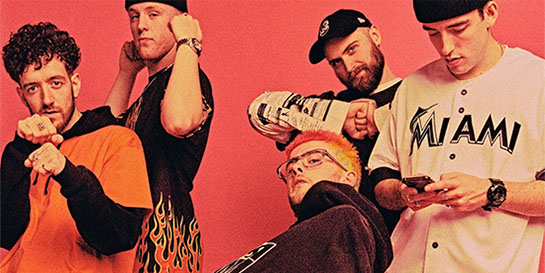 Island are kicking off the new year with today’s release of Junk Food, the new mixtape from Leicester’s five-piece Easy Life who have also been named runners up in the BBC’s Sound of 2020.

The mixtape follows two years of hard work by the label, culminating in the band becoming one of the most hotly-tipped acts in the UK: GQ state that the boys are “poised to be the UK’s next big band” while NME have declared them "the leaders of the pack".

Island’s marketing manager Charlie Smith says, “Easy Life had a brilliant 2019 and have started the new year with a bang! Their first release of the year is set to make a big splash and their biggest headline show to date at London’s Roundhouse in March is about to sell out - we’re looking forward to taking the Leicester quintet up to the next level in 2020.”

The extensive marketing campaign, which follows a Colors session and a special appearance on Later... with Jools Holland, will be spearheaded by a Meal Deal tour in conjunction with Banquet, Rough Trade, Vinilo and Cult Hero which will see a run of intimate shows taking place from today in Kingston, Leicester, Nottingham, Southampton, Bristol, London, and Brighton. The label have bolstered the campaign with a range of statement out-of-home advertising at sites across London including a 3D build in Clapton.

The mixtape features lead single Dead Celebrities and the tracks Earth and Nice Guys, both of which have already been named Hottest Records in the World by Annie Mac, alongside Sangria which features musician and poet Arlo Parks.

The boys have also announced their Junk Food tour which will see them cross the Atlantic to Canada and the US at the end of February before heading back to Europe for shows in the UK, Germany, France and Spain.