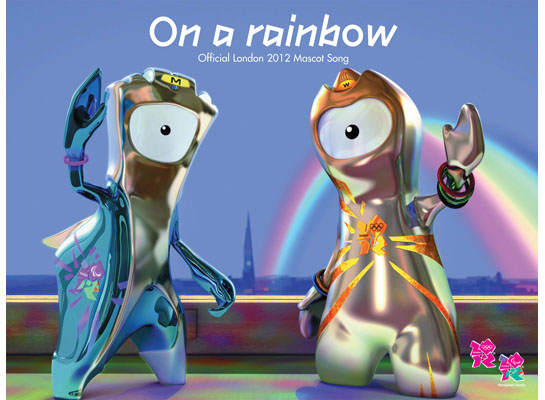 In the two years since they were unveiled Wenlock and Mandeville, the official mascots of the 2012 Olympics and Paralympics, have already made a big impact in the run up to the Games inspiring thousands of youngsters to take an active part in sport.

On A Rainbow, a specially commissioned song to celebrate the pair, could hopefully help turn one of those kids into a future Olympian.

The animated characters, supposedly fashioned from two droplets of steel from a girder destined for the Olympic stadium, each embody characteristics of London and the Games and have been named after places with strong Olympic ties.

Wenlock takes his name from the Shropshire town of Much Wenlock because the Wenlock Olympian Society held its first Olympian Games in 1850 - widely regarded as an inspiration for the modern Olympic Games.

The song, On A Rainbow, was penned and recorded by McFly star Tom Fletcher who suggested the backstory behind the two mascots appealed to him. “I wanted to get across their two personalities so people could get to know them and what they’re about,” said the band’s lead singer and guitarist, who was helped on the recording by his sister Carrie and pupils from West Leigh Junior School Choir in Southend-on-Sea.

The song describes Wenlock and Mandeville’s journey and adventures from being created on the floor of a steelworks to joining the athletes at the Games in east London.  Fletcher said he hoped it would be “fun for kids and a song that kids could remember and sing along to.”

His sister Carrie has no doubts the mascots - and the song - can inspire a future generation.  She added, “Wenlock and Mandeville are awesome, such cool little characters and kids will really respond to them.”